A downloadable game for Windows, macOS, and Linux

Ride your bike around the small British town of Figgington to meet its sardonic residents. Use your map to explore every corner, from its run-down town centre to the local pub as you discover the town's deepest, darkest secrets.

Learn techniques for dream control and enter Lucy's mind to unlock hidden memories, discover the past and unearth the disturbing truth behind her recurring nightmares.

Along the way, you'll need to solve a huge variety of puzzles, so pour yourself a nice cup of tea and bring your powers of observation, logic and lateral thinking.

From her dysfunctional family and the cynical Figgington townsfolk to the myriad of extraordinary characters from the depths of Lucy's subsonscious, do you have what it takes to pacify giant crabs, interrogate old ladies, satisfy toddlers and bargain with trolls? Just don’t forget your teddy bear.

In order to download this game you must purchase it at or above the minimum price of £14.99 GBP. You will get access to the following files:

I absolutely loved this game. BTW I made a microreview in spanish😊

Amazing, thank you for taking the time to play and review it! 😍

This game looks right up my alley!

I have to ask, though, is there a GOG version planned? Sorry if this has been asked already.

Good question!
It's not actually possible to "plan" a GOG release as such, because their curators manually approve/reject every single game on the site. We submitted it for review months ago and it was rejected with no tangible reason given.

There is a glimmer of hope, however. You can vote on the Lucy Dreaming GOG wishlist here: https://www.gog.com/wishlist/games/lucy_dreaming :)

Thank you very much for the kind answer! I have already wishlisted your game on gog and I will wait a little bit, hoping it happens. But the platform is of secondary importance, I am really looking forward to enjoying your game!

Thank you, it's VERY much appreciated.
I hope you enjoy the game :)

Hey, just so you know… we have now been accepted onto GOG too, and will be launching there soon 😊

Hurray, this is fantastic news, thank you so much!

The store page mentions a launch discount, is game officially launched ? The Itch.io page says "In development" still. You may want to update that as some potential customer's may be turned off if they think the game is still in early access.

Whoops! Good shout, thank you!
There were so many buttons on so many platforms on launch day.

Yes, the full game has launched and I have adjusted the price on Itch to match the Steam sale currently running (until Monday 24th October).

OK, leave this with me! I'll update the build ASAP.

Righto, that should be fixed now :)
Let me know if you have any issues loading it up.

This game is one of my highlights of the year!
It got me entertained from start to finish. I loved the witty writing, laughed out loud several times and had that splendid aha-moment when solving one of the trickier puzzles. Speaking of which - excellent puzzle design! The puzzles are varied and sometimes challenging, but always fair.   The voice acting is great, too. I have fallen in love with all the quirky characters.

Woohoo! Thank you so much Esmeralda!
I'm so glad you enjoyed playing it as much as we loved creating it!

Saw the pictures and was already amazed like hell. Watched then the YouTube video and was thrilled like a little child on Christmas Eve. Bought it directly and fell in love with the game. It's this warm and cozy feeling I have, just like back in the days when I was playing Maniac Mansion or Zak McCracken.

There is only an issue with the sound, it is a bit choppy all the time. Is there something I can do? Any misconfiguration or something else well known causing this phenomena? I'm on Ubuntu 22.04 (i9 CPU, 32 Gig of RAM, RTX 3070Ti).

Thank you so much, sorry to hear about the audio. Let me have a chat with the engine devs and see if there's anything that can be done. Any chance you'd be able to capture a bit of video and email it over ?(Sorry, I didn't meant o rope you in as a tester on day 1)

Hey, this is absolutely no problem. :) Software development for different operating systems isn't easy and I think game development is even trickier. I will try to do everything what helps. Maybe this is just a problem on my side?

I have captured a video of the game and uploaded it here: https://app.box.com/s/iv5r33e9lwfzljm32dep7lojd3n7sjuc (about 5.5 MB, MP4-File)

I hope this is OK? Otherwise I can mail it, too. If it is too short or you need any other informations, please let me know. :)

Thank you, that's really helpful!
I have submitted your video and a bug report to the engine devs, hopefully this can be remedied soon.

Thanks for the info! Will pass this onto the engine devs. Hopefully something we can sort out soon!

Hi, sorry for the late answer. No I not on a VM, this is a native Ubuntu installation. :)

I’ve spoken to the Visionaire developers about this and they have said that a new audio system is in production, but won’t be available until next year, unfortunately!

Sorry, it looks like I won’t be able to provide a version with perfect audio which is compatible with your system set up in the near future! In the meantime, if you would like a refund for your purchase, I think you can contact Itch.io support. 😊

Just a thought... Please could you try switching the audio settings to stero instead of surround, and see if that fixes it?

Thanks so much for your comment, it means so much to me that you enjoyed playing it 🥰

Super interesting game!  The puzzles where really fun and the witty humor is the icing on the cake. Good job!! Thanx & waiting for the whole game!

Awesome, thanks for the comment! I'm so glad you enjoyed playing the demo! :D

Thank you, and thanks for taking the time to put together a playthrough too! :)

A great demo, had much fun playing it!

You already know I like LD and this demo is a great ramp to send you flying towards the full game's bigger world. Lots to speculate & wonder about. I hope we get to see the whole family eventually. :) Waiting for the Kickstarter.

Fantastic! Thank you for the playthrough, I loved your comments about her parents’ bedroom 😂

Really happy to finally be able to play this!  I am very excited for the full release and will absolutely be backing the game.  The art is lovely and the care and attention to all of the custom responses is extremely fun to explore.  I definitely found a few unexpected Easter eggs as well.

What kind of of wacko young girl keeps a venus flytrap and a pirhanna as a pet?  And with that messed up family situation?  It's no wonder she's having trouble sleeping!

I really took my time exploring and trying lots of stuff,  but I found the difficulty pretty breezy overall and would have been able to complete most of the required puzzles in about twenty minutes or so if I wasn't taking my time.

I did get massively stuck on one puzzle: warming the milk.  I eventually worked it out, but I feel like there were several equally viable options that kind of red-herringed me away from the intended solution.  First, there were the matches and candle that Lucy decided she did not want to pick up - that would be an elegant solution.  Also, I was convinced the lightbulb in the hall would be able to do the job.  Finally, I know how hot old laptops get, so I wanted to sit the glass on the computer and turn it on.  This puzzle might do with a bit of tweaking or signposting in the full release.

Also, small bug (literally), a hotspot for the fly seems to remain in Lucy's bedroom even after the little pest has been relocated.

Congrats on the release of the demo and wishing your kickstarter campaign the best!

Hey, so glad you enjoyed playing it. Thanks so much for the suggestions and feedback too, I really appreciate it! 😊

I’ll see if so can add a few more custom responses so that and potential red herrings lead you in the right direction, it’s kind of a symptom of having so many interactive items in each scene, there are naturally some things that could solve the same puzzles. I prefer not to have multiple solutions, but will definitely add in some more signposts for the options you’ve tried!

I’ll look into that fly hotspot too. She will react with “It’s gone.” If she reaches the fly too late, but the hotspot should disappear as the fly is flying! Leave it with me 😁

The fly bug has now been squashed! :D

Haha, I've tried the same three options before I found the solution!

Probably it's so hard to solve because Lucy has huge pigtails which cover some areas where the solution may be :)

This is genuinely AMAZING!! I'm a sucker for point-and-click and 90's so this was so much fun!! I'm really excited to see more of this in the future!!

Awesome, that means so much to me. Watching your video now! :)

I love this demo, so many references to the classics, good puzzles, nice graphics, humor, fully voiced, etc.

That’s great to hear, so glad you enjoyed it! ☺️ 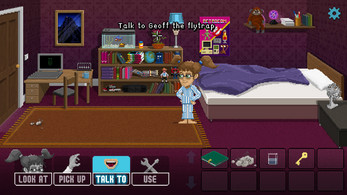 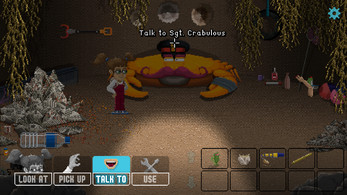 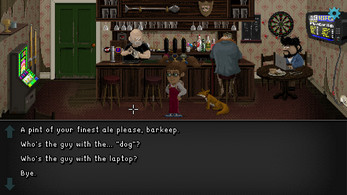 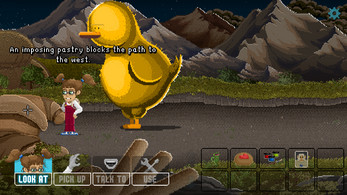 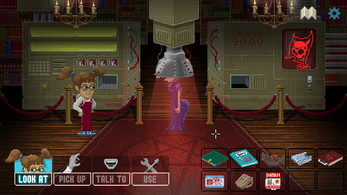 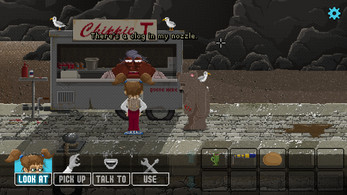 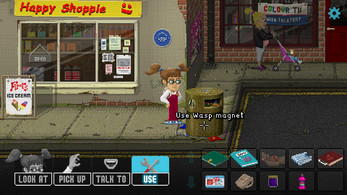 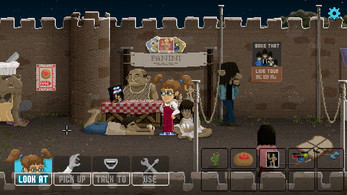 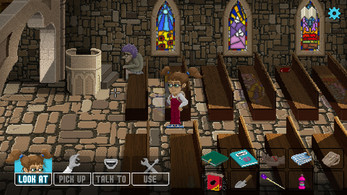